skip to main | skip to sidebar

honoring the past to inspire the future 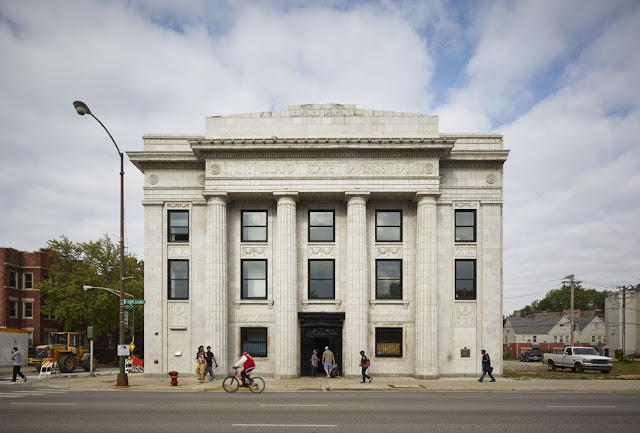 I'll admit. I love old buildings. Whenever I see an older building that has been neglected, I dream of what could be. But even I didn't expect to gasp out loud when looking at images of this cultural center in a former bank in South Side Chicago. It's that good.

The Stony Island Arts Bank is the latest project of Rebuild Foundation, an organization dedicated to to rebuilding the cultural foundations of underinvested neighborhoods and inciting movements of community revitalization that are culture based, artist led, and neighborhood driven. With that goal in mind, the way the Arts Bank's design does not merely restore the bank to its former glory, but uses the decay to create a new design that honors the original design, the more recent past of neglect, and the current mission, all in order to inspire the future of those who enter. 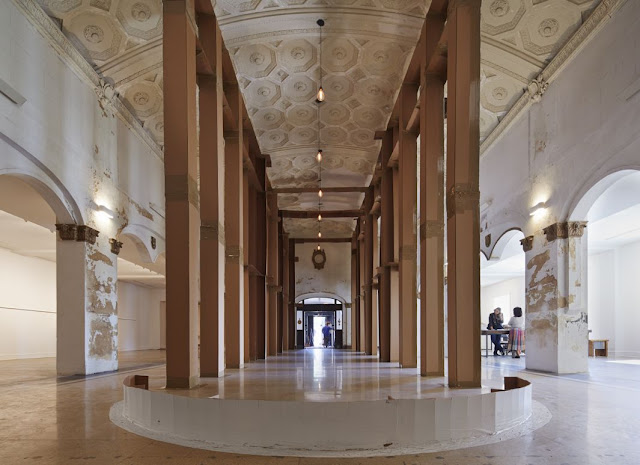 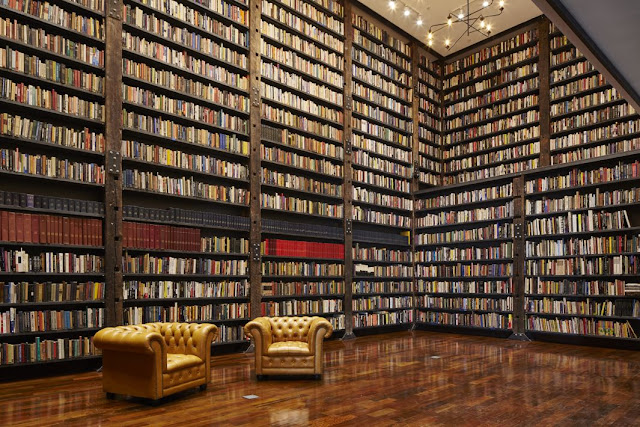 This is the question behind "The Portrait Project," an exhibition celebrating the strength and resilience of individuals and families experiencing homelessness..."At a time when NYC homelessness is at record highs, one of Art Start's missions is to start a dialogue about what it means to be seen," explained Johanna de los Santos, co-executive director for Art Start, in a statement. While the majority of visualizations depicting contemporary homelessness summon feelings of compassion, sympathy and frustration, Art Start hopes to shift the dialogue, celebrating the fortitude and enduring imagination of the pictured individuals, who refuse to let their circumstances define their identities."
- Priscilla Frank, The Huffington Post

Posted by percentblog at 1:44 PM No comments:

personal style, a little bit of everything 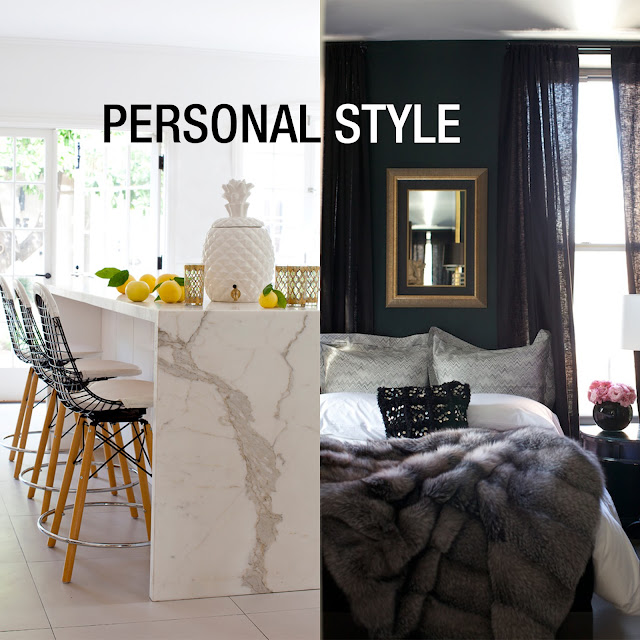 "I have the honor of interviewing talented designers for each issue of Rue Magazine, and a question I frequently ask is “how do you define your personal style?” There is often a long pause, as this question can be difficult. Yet flipping through each designer’s website, their personal style becomes obvious, even if it is hard to label.

Glancing around my own apartment, I wonder if my own style is as visible. My closet is easy. My fashion sense is somewhere between Audrey Hepburn and Katharine Hepburn. My dream home? A combination of Marcel Beuer and Antoni Gaudí… with a dash of Louis XIV."

I had the honor about writing about my confusing, conflicting, and perhaps undefinable personal style for Rue Magazine. Read it on page 40 of our latest issue and I promise the rest of the issue is just as delightful.
Posted by percentblog at 3:35 PM No comments:

a uniform is never thoughtless

"With a fairly important meeting on the horizon, I started to try on different outfits, lacking any real direction or plan. "Is this too formal? Is that too out there? Is this dress too short?... As I arrived at work, my stress level only increased as I saw my male creative partner and other male co-workers having a "brodown" with the new boss as they entered the meeting room—a room I was suppose to already be inside. I just stood there—paralyzed by the fact that I was not only late, but unprepared. And my sweater was inside out."

Matilda Kahl's piece for Harper's Bazaar was the first article on wearing a self-imposed daily outfit that hasn't left me wanting to tear our my hair. (See: Stuart Heritage in The Guardian's How to be as successful as Obama and Zuckerberg: wear the same clothes every day. It may work for the President but how would that work for Michelle Obama?)

I like Kahl's piece because I agree. Uniforms can be powerful. I love Janelle Monae's commitment to her black and white style and have long expressed admiration for the architecture professors of the world who look chic in daily black. Her feeling of panic  at getting dressed is one I have felt many times and I, too, have a standard look that I put on no matter the situation when I'm unsure- dark jeans, a button down shirt, and some oversized necklace.

Kahl and Heritage agree that thinking about exactly what to wear takes up amount of time and brain space, sometimes distracting from other things that need to get done. Heritage however frames it as time that the busy men he profiles just can't be bothered to take. That taking the time to think about clothes is trivial or a waste. What Kahl gets, perhaps better than most given her job as Creative Director, is that no matter what we wear we send a signal. Zuckerberg does it in his hoodie, and it's a signal that works for him both because of who he is and what his surroundings are. It would not work for President Obama for the same reasons. (And when Zuckerberg met Obama? He wore a tie.) Kahl saves herself time now by wearing a uniform, but it only works because she thought through a work outfit that would always be appropriate.

Me? I'm not giving up a rainbow of colors (okay, yes, mostly blue and green and sometimes red.) But I get it. Now excuse me, I've got to throw on a button down and get to work.
Posted by percentblog at 12:49 PM 1 comment:

“It’s a mistake to think the consumer cares as much about your brand as you do. They may spend 2 seconds of their day thinking about you, so you have to nail it in the fewest words possible, and be relentlessly consistent.”
- Barney Waters from K-Swiss, in Hypebeast interview of three street wear brands
Posted by percentblog at 5:12 PM No comments:

i actually use mailchimp

Sad it's all over? No, I'm not talking about the holidays. I'm talking about the end of Serial. While Jay may have finally stepped forward to give his account, our Thursdays are missing the most popular podcast of time, brought to you by MailChimp.

I loved Serial as a fan of podcasts, and while I initially cringed every time I heard "MailKimp," the marketing geek inside me was fascinated by their lucky break. They actually managed to become part of the story of Serial.

But just how did MailChimp's 19 second ad get to be "the official sponsor of engrossing teenage murder sagas everywhere?" (@JeffLoveless.) Here's a little case study I wrote up. 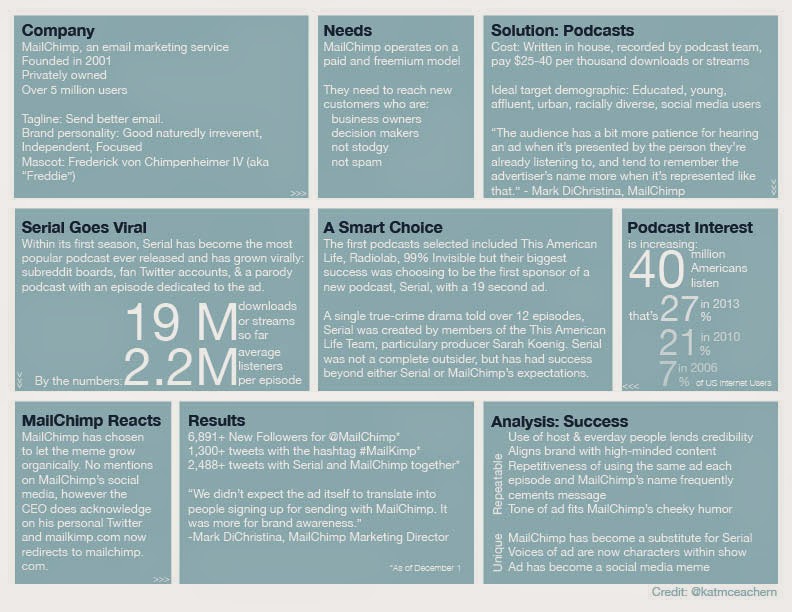 *I actually created the graphic in early December before the finale so the numbers are already out of date.

Posted by percentblog at 1:39 PM No comments: 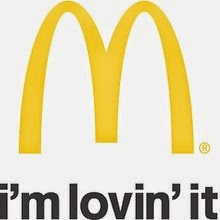 Rumor has it McDonald's will be launching a new campaign "Lovin' Beats Hatin'." I get where they are coming from, using this as a way to build on the "I'm lovin' it" campaign (and they say that slogan will stay around.) I can hear that "da-da da da da" refrain in my head and have a habit of saying "I'm lovin' " despite it being quite a while since my last Big Mac, so it seems the campaign was successful. I'm not sure that "Lovin' Beats Hatin' " is the right way to go, however.

I'm not a McDonald's fan, so maybe I'm in the minority, but I think this butts up against something that should be avoided in advertising- saying what you don't want people to think.

McDonald's knows they face a myriad of criticisms- charges that they are causing a childhood obesity epidemic, Super Size Me, being the focus of the fast food workers unionization movement, pink slime, and the list goes on. So should McDonald's encourage loving over hating? Or does it just feel like Mickey D is asking people to not hate them?
Posted by percentblog at 12:58 AM 3 comments: 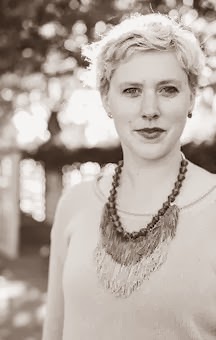 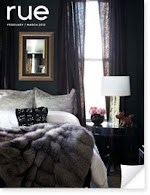